Hauser in the cities 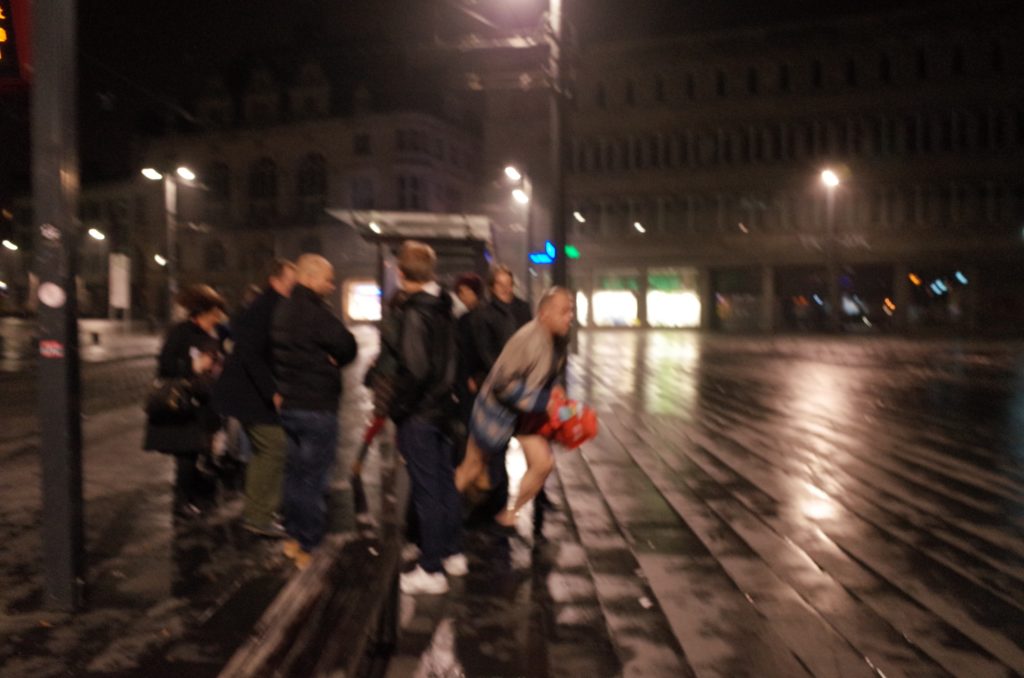 25th Oct. 22:36 I am angry, the causes of which I don’t fully understand or want to explore beyond the feeling it is one of those days. I need to go home to be alone, uninterested in hanging around the cold strange night for interventionist radio. About to leave the Radio Revolten club as the Oracle places a radio into my hand. OK, all is clear, I will follow the action as it unfolds. The prospect of another powerful investigation of Halle’s public space by Ralf Wendt is, naturally, too compelling to forgo. The radio crackles and splutters as we tumble into the crisp air.

Slowly, I begin to wander towards the marketplace as rumour says this is where the action begins (who knows where it will end?). A group of youthful Russian visitors follow on. When we reach the square I hang back, mesmerised by the rays of light shining up over Händel’s head in the misty gloom. I stop for photos, then my attention jumps back to the radio in my hand as the focal point of this moment. I hold it up for a portrait with the towers. A dishevelled man enters my view as if dropping from the sky, I watch him while shielding myself with the radio. He bends as if to sit on a bench, but instead slides to the floor in a fluid move, managing to swing his carrier bag under his head like a pillow. Asleep instantly, in shorts. Surely his skin will freeze to the ground. Who is this unusual creature? Am I needed to intervene or is it an elaborate hoax? It looked like a deliberate descent to the pavement, as if into bed. But I need to keep an eye on him. Perhaps this man decided to die on that spot. 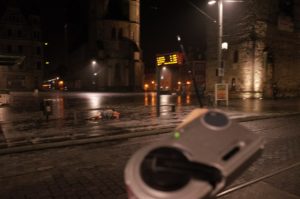 I wait and watch. The Russian group circles the Red Tower. They hear their own voices on the radios they are carrying. But how? The locals at the tram stop don’t want to notice the frozen man, but start to realise they have no choice. Somebody needs to call the emergency services. A small figure known to me approaches and looks concerned. She crouches down at the man’s side. Is this part of the action, or has she stumbled across a terrible situation? The Russian group gathers around. One throws a coat over the man’s bare legs. But then they start to sing. They know the game. They hear themselves clearly on the airwaves now and celebrate the situation with a mournful tune. 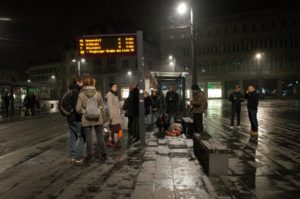 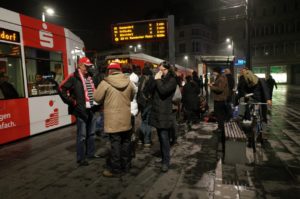 In the meantime some sort of guard arrives from across the square. He joins two agitated young men already convinced of the situation’s surface appearance. Suddenly, the dying man jumps up and charges across the vast empty market place towards the Hausmann’s Towers. I now see for certain who it is; the figure had been unrecognisable in its potent psychodrama. The group rushes after him to catch him banging loudly on the tower door. He is swiftly swallowed by the building and the door slams shut. 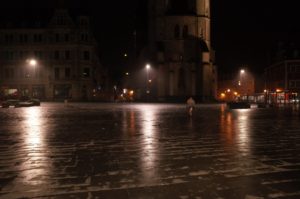 An ambulance arrives on the scene – elaborate embellishment, but most likely real. The crew also bang on the tower door, and start to question people. The audience disperses back into the square: the heat is turning up a little and it is getting uncomfortable. The ambulance crew must make certain, so they approach me as a solitary bystander. At first they want a German speaker. I manage to confirm that the man was an actor, part of a performance, a true radio drama. Although unsettled, they seem satisfied by my assertion, and the fact that so many people are holding radios. But the two young men are angry and want me to take it. How can you do something so real just for show? That’s categorically beyond the realms of decency! Sorry I say, I don’t understand all of your words. 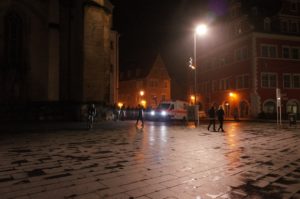 Nobody knows if this is the end of the show. The ambulance disappears after making a circle of the square. A few minutes later figures appear on the lofty bridge between the towers. The Russians wave and cheer. They raise a huge Thank you into the night sky. One takes a delighted selfie with me, and swaps email addresses for a photo exchange. He is very warm.

Football fans start to offload in greater numbers from the trams, drunk from the city’s game against Hamburg. They too sing out across the square. A young unemployed man lingers to question us all about our lives. Very curious and engaged. 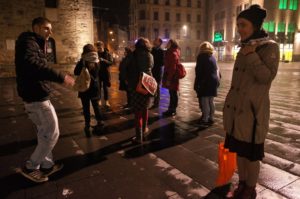