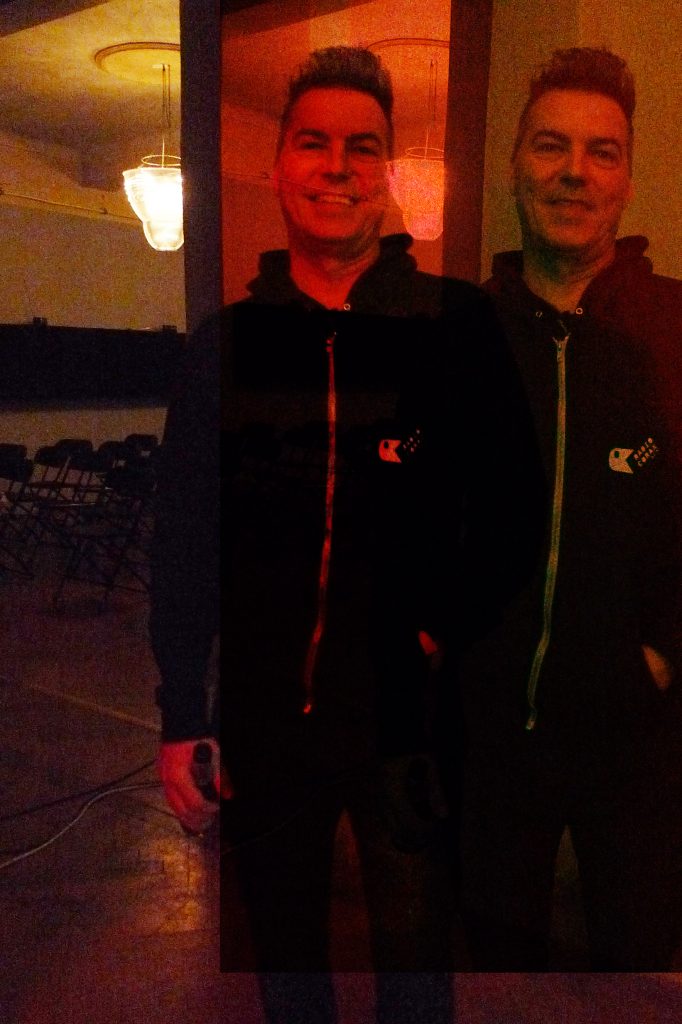 – These sounds you just talked about…

(Passer-by from the audience): Well done! You really pulled the spectrum from big big bass to diddly (?) tunes…

– … sounds that are derived from acoustic hallucinations?

They are based on stories about these hallucinations. In a world of people who hallucinate sound it is incredible there is no one way to describe it, so, I have been drawing from literature and from scientific journals…

(Passer-by from the audience): Thanks man! Terrifying, Steve!

But tonight I made a soundscape meant to be a hallucinatory soundscape. Sometimes of the things I am working with is specific frequencies people have recorded for hallucinating. For example Robert Schuhmann famously hallucinated entire pieces of music he would then write down. Lateron in his life his hallucinations were reduced to hearing a single A5. That piano note, that frequency showed up also in my piece.
So I am drawing on so called historical experiences that made their way into recordings in different ways.

– Then you did research and recreated those sounds? Or is it more like a poetic reconstruction?

It’s not so much a recreation as using those stories as inspiration. SO sometimes it is quill specific like Robert Schumann and there are these A5 piano notes in that piece and this is also close to 880 hertz which was a tone you heard at the beginning of the piece. So sometimes it is very literal and sometimes it is more evocative.

– For me it felt at times like being thrown into a minimal techno club dungeon. There are references to dance music.

Yes. They are more so when I perform other pieces. This was a very different performance to me. This is based on a project I have been working on, a multi year research project. I stared the research in 2014
And for tonight I thought I’d prepare a series of sketches or scences, so it is much more structured. Usually I perform more improvised and of the cuff so to say.

– One thing that struck me was that when it was so loud that the walls were almost shaking it reminded me of very strong forces of nature like earth quakes and thunder and of th feeling of awe or even terror it can induce in people.

For me the whole subject of auditory hallucinations is very much of the body, so it is related to people’s experiences and I  can only interpret them as I am not that person. And I am hearing other people’s stories, very powerful stories… it is also a challenge because I don’t want to be flippant or light with material for some people here who are listening it is very dramatic.
So there is this balance I am trying to make my way though.

But what is among the nice things in regard to this is I make many kinds of presentations and talks about this project and every time I’ve talked about it or performed somebody has come after me  after it and shared a personal experience or of one they know that has been exposed to one. (…)
Prisoners and solders in confinement also often hallucinate, sometimes it is also visuals or scents. yyou can also hallucinate scents. SO for me the project is really encompassing and making you think about otherness. Ultimatel I can be standing right next to you and our experiences would be very different… I mean they are definitely different…

It’s a very interesting thing that in North America and in Europ, people who hallucinate  voices it is more often negative voices and it can be multiple voices at the same time. Like i hear somebody saying „I am horrible person, I don’t deserve to be alive“.

– Maybe it is a Western construct of personality that is related to this?

It is a social and a cultural thing too. For example they did a study about people who hallucinated voices in the US and in Ghana, in Africa and also some place in Pakistan and it was only the people in the US whose voices were negative, whereas the people in Ghana _ in the survey – tended to hear voices that weren’t negative they were more … maybe banal. One of the researches proposed that this is because the US are a very individualistic society and that there is a real stigma attached to hearing voices. And this is about people who are not schizophrenic this is not pathological and my whole project is about this hearing voices not being pathological.

Last question: Do you do a score for your pieces or do you perform them intuitively?

Tonight it was as I said a it was an unusual performance for me. It was a loose composition in sections or maybe I would rather call them „scenes“ . But normally when I play music it is more improvised.