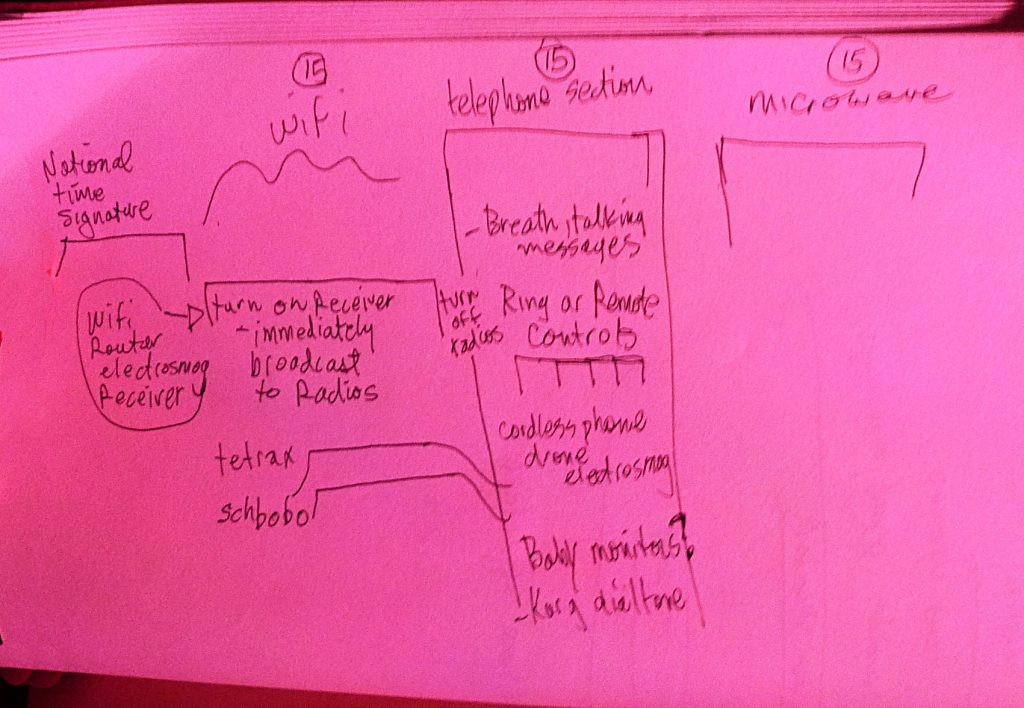 As promised, here comes the talk with Kristen, Jeff and Anna from 3rd. Oct.

– I understand that the three of you never played together. Can you tell me about the various parts in your concert, what you were doing?

Kristen: I was just picking up different frequencies from the things I have here, like micro waves and the phones. The phones they have a frequency and they communicate between each other. It’s 1.9 gigahertz for the phones and the microwaves are 2.4 gigahertz, so it’s a different tone. The WI-FI router is the same frequency as the microwave oven.

– What did you put in the microwave oven?

I boiled some water first and made tea. And then it was soap. It has air in it, so it puffs up a little bit when you microwave it.

-Did you count of the olfactory element?

– Do you work with different smells?

Just this one. I like that it has this kind of sickly soap smell. Some people thought it was wax or something. And the soap reacted differently to European microwaves. In North America they puff up really big, they become like very big meringues. I think they are just more efficient in Europo so they become more like cracked scupltures.

– How did you decide who’s doing what at what point in time. Did you have a plan?

Ja. Well, I work with these frequencies from appliances. We kind of went through three different sections. It started with the WI fi router, that tick-tick-tick sound, that’s the router, one was about telephones and then it went to the microwaves and this kind of drones.

– Jeff, what were your elements?

That’s a good question. Anna just told me that I was landing a plane.

Anna: Yes. Those big bass riffs, that was you.

Jeff: They weren’t probably as loud. I think I was probably the bass line… keeping time. And the clicking-clock in the beginning, so I was the time-keeper pilot.

What about that big radio that was standing between you and the audience?

Anna: Thats two small radios on top of a synthesizer. Go and have a geek-hock and see it for yourself.

Anna: and also the little feed back boxes and the tiny synthesizer…  and the mouth harmonica.

– Your piece was about an answering machine feeling lonely. What about this aspect of long distance… and speaking into space?

Anna: It was all about all these things and … home radiation. It was about imagining all this activity these things were having in the house, including the answering machine. You know, none calling… or maybe somebody has left a message on you voicemail and you didn’t care for it…
(mimics:) You know, this is my role in life, I am your voicemail, and now nobody listens to me anymore…
But basically we had three sections: the w-lan section, the telephone section and a microwave section, very loose though. There is  a little score that Kristen wrote out, so you can maybe take a picture of it. He has very nice handwriting, so it actually looks good.