Order is a Dangerous Thing 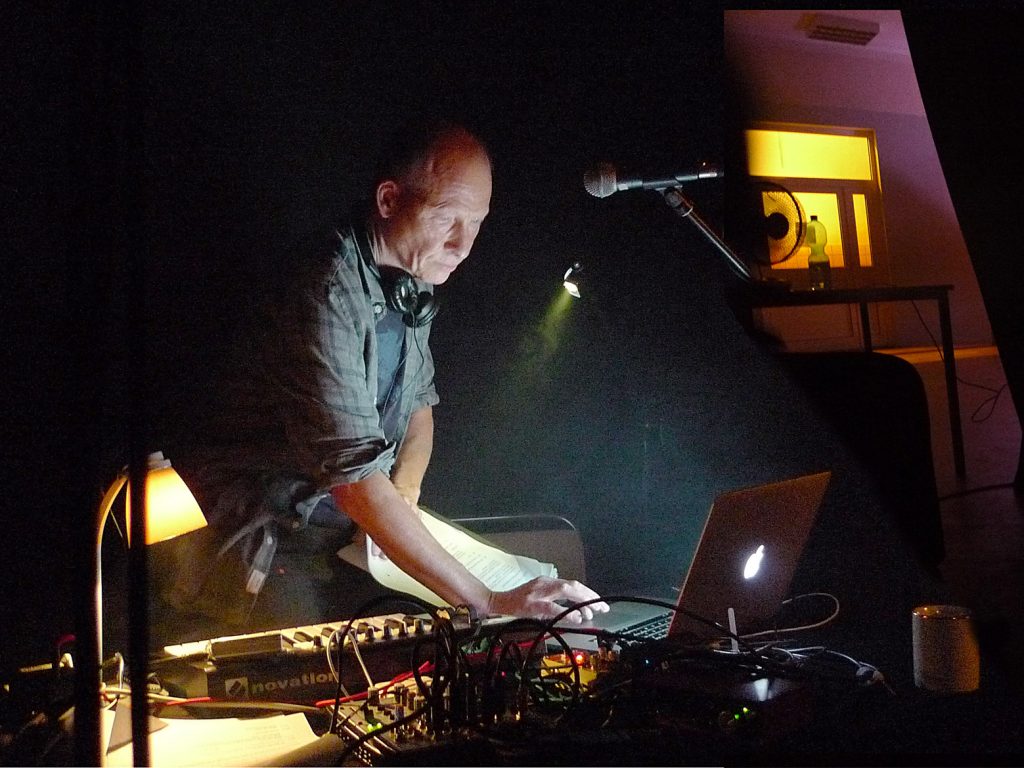 Xentos ‘Fray’ Bentos is only one of the 280 pseudonyms  Jim Whelton uses to propel his works into the universe.  The London-based video and radio artist, writer, performer and sound designer wrote extra for this evening a brand now radio play. So this was another miraculous premiere… as most of the performances already were. Equally miraculous was the lightning speed by which the voluminous script got translated into German (with a time frame of less than 10 hours) and the absolute sovereign and elegant expertise of Ralf Wendt performing it. Anna told me three people were working at it simultaneously… and the result was amazing. Cheers to Helen Thein and the hidden geniuses in the Corax and Revolten translation team!

Consequently and as an exception, it was the only performance so far in German language only. A sign at the entrance warned that the artists would employ a fog machine. Indeed, the side curtain was lifted from time to time to let in a hiss and a stream of stage fog.

Of course this monologue held by an alien from space having invaded the mind of an earthling posed some challenges to the listener. Papers! Paper! How can they possible get sorted into sequence and sense? What you should never do is: Start to read the stuff while you are trying to sort it. Or you will still be sitting there when „the last stars of the universe have been extinguish by eternity“ (possibly slightly simplified quote).

So in the beginning there was (papery) disorder and the result of contemplating it a fractional set of really diverse musings on really diverse topics: Water damages, time-travel, debris, goat-killings, air condition, mind condition and more. On doing so, Wendt cultivated a rather „wet pronunciation“ evoking the idea of him being slightly deranged (he was an alien as it turned out anyway). Ruminations ended with a most interesting account about Jesus’ death and we all know now, it was the „Black thorn Bush“ that made his crown.

Meanwhile Xentos Bentos accompanied the monologue with the occasional rustling of paper and restrained but no less accentuated sound recordings and effects. While being the author of this fulminant script, he didn’t utter a single syllable.
To all those who might still reach out for some order in their lives, let one quote ring in your ears: „Order is a dangerous thing, at least until you find out that there isn’t any.“