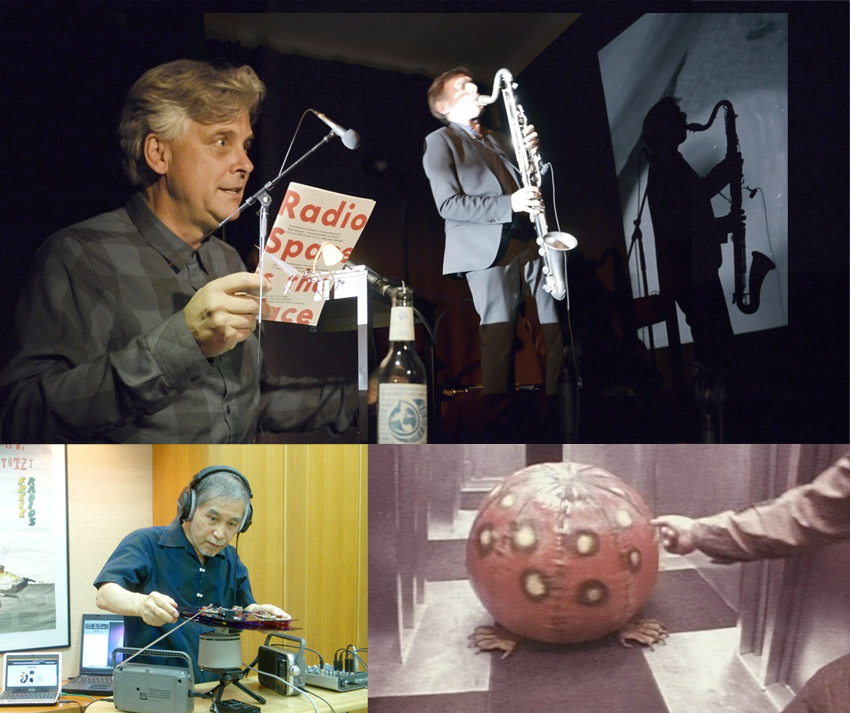 Much was expected from this almost ultimate Revolten Klub evening with the radio art pioneers Gregory Whitehead and Tetsuo Kogawa starred in the program. Additionally, the  Italian artist and musician Roberto Paci Dalò was to present his piece „1915 The Armenian Files“.

Whitehead proved to be of  the spontaneous ingenuity he is known (and maybe even partly feared) for: After having breathed the airs and auras of Revolten he decided to skip his announced performance of the piece „ON THE SHORE DIMLY SEEN – no-touch torture, sound waves and the destruction of the self“, a work focussing on „invisible“ torture methods as used in Guantanomo and other prisons of the world.
Instead, he went for a stand-up improvisation of radio „Cabaret“ inducing the audience to sing along in a call and response way, but not before having taught them the basics of belly intonation and head voice. Whitehead’s thing was about song and speech, live impro, radio and humor… and for one extremely enjoyable part, singing out the names of all staff and crew members, it was a homage to the men and women who make this festival happen.

One could object Whitehead’s performance was may be a bit too „Holly-Go-Lightly“ considered what great and serious ART (yes, with big letters) was missed in going unperformed. Alas, with the „Armenian Files“ performed by Roberto Paci Dalò the moment came when I secretly wished that swap between tragedy and comedy had happened the other way round.
Dalò  works as a sound artist, musician and visual producer. As the title says, his piece dealt with the Armenian war and with his visit to Beirut where he filmed what was left of debris in the debris.
I can well imagine that the idea behind Dal`s performance is as complex as conceptually stringent and yet it missed a point…. at least in a surrounding where artists are not so much concerned with (representation) as with authenticity.
It would have helped hugely if the documentary material came along with a translation of some sort. What were the dialogues/monologues about? Who was speaking? Musical allusions to the Armenian culture and fate and beautifully filmed images of children and industrial places are not the adequate means to deal with the terrors of wars, past or present. 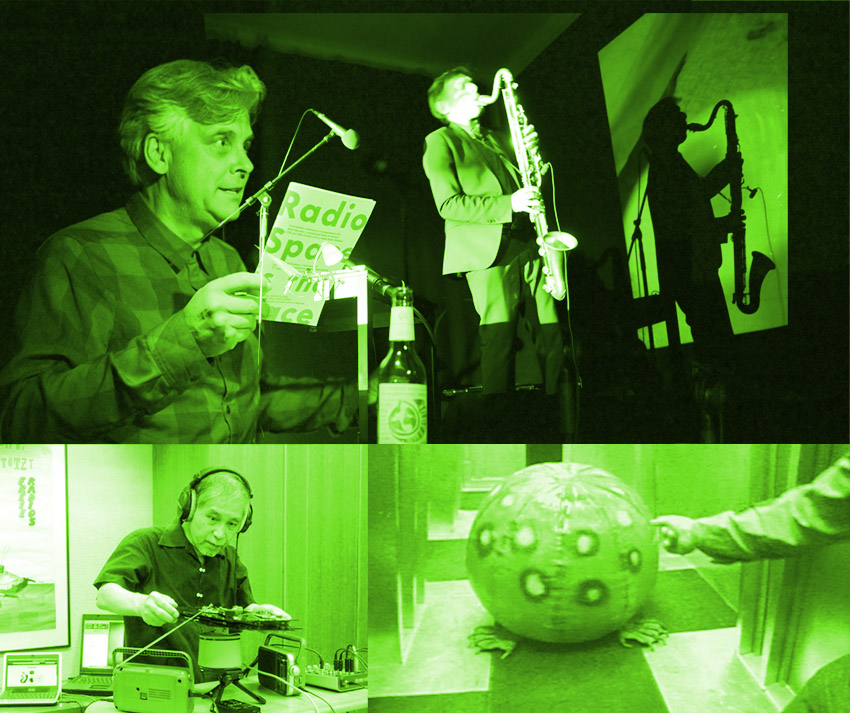 Tetsuo Kogawa did not come to Halle in person but he sent a video. Of course, Kogawa is legend. Based on his DIY instructions on how to solder electronic parts, platens and wires together as to make a radio, a worldwide community of radio makers and activists sprouted and bloomed into fruition until today.
In his mail communication Kogawa said it had taken him twelve attempts to make the video. It proved to be 16 minutes of utter pleasure in image, sound and humor. Raised by his hands from a manege-style lit table four transmitters – each with a red antenna that dangled down from it like the coiled tail of some alien littles animal – engaged in a conversation that was solely contingent on their spacial relationships and the immediate parameters of the momentum. Radio is about communication and this was animated radio… animated by the flow of frequencies, the conductivity of the air and the varying distance between the participants. The feel of witnessing a discussion of little creatures from out of space was very strong and more than once I recalled that orange (or was it yellow) „hop ball alien“ from the movie Dark Star that emitted similar sounds. As far as I remember further, this whistling and squeaking creature was then partly responsible for the catastrophe in which the plot ended, but then again, this happened only because it was so much disliked and disrespected and not fed properly (vegetables!). What can be learned of these idle musings remains in the open 🙂

P.S.  I did it again: Deleted all image files from that evening!