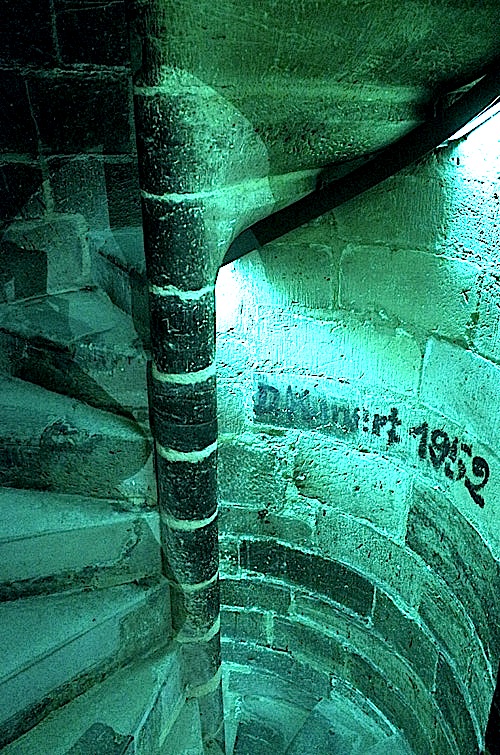 Presented on loudspeakers situated at discreet locations inside the Roter Turm, “In the Air We Share” is a chance-based sound installation composed of multilingual words and phrases which recall profound transcendental experiences. As bodies become fully engaged in climbing the tight spiral staircase, ordinary distractions are left behind on the ground. Voices within the tower transmit information about an elevated state of being, calling upon something other than the physical body to ascend through space.

During Radio Revolten there will be a companion broadcast composition for two radio frequencies.

Anna Friz “The Envelope of the Hour”

Bell towers have historically marked and measured social activity and the tempo of a day with their sonic presence in a town. Today time is determined globally under International Atomic Time, a coordinated time standard established by a network of cesium clocks operating in various countries, synchronized and transmitted by satellite and shortwave frequencies worldwide. The advent of atomic time means the second is now the fundamental temporal unit, no longer defined as a fraction of a year determined by cosmological measurement (such as Earth’s rotation around Sun) but as a vast number of very quick oscillations. Likewise, time standardization functions as a normative field of influence – from time obedience (social behaviours in response to the chime of the clock) to time discipline (internalization of punctuality such that behaviours anticipate the clock). Meanwhile, quotidian perceptions of time continue to elude such regularity, and even digitally networked devices may fail to synchronize. The Envelope of the Hour is a multi-channel sound installation made from audio manipulations of the radio broadcast of the atomic clock and sounds of the bells, exploring the sonic resonance, suspension, drift and decay of atomic and mechanical clock time.

This project was supported in part by a grant from the Arts Research Institute at the University of California, Santa Cruz.