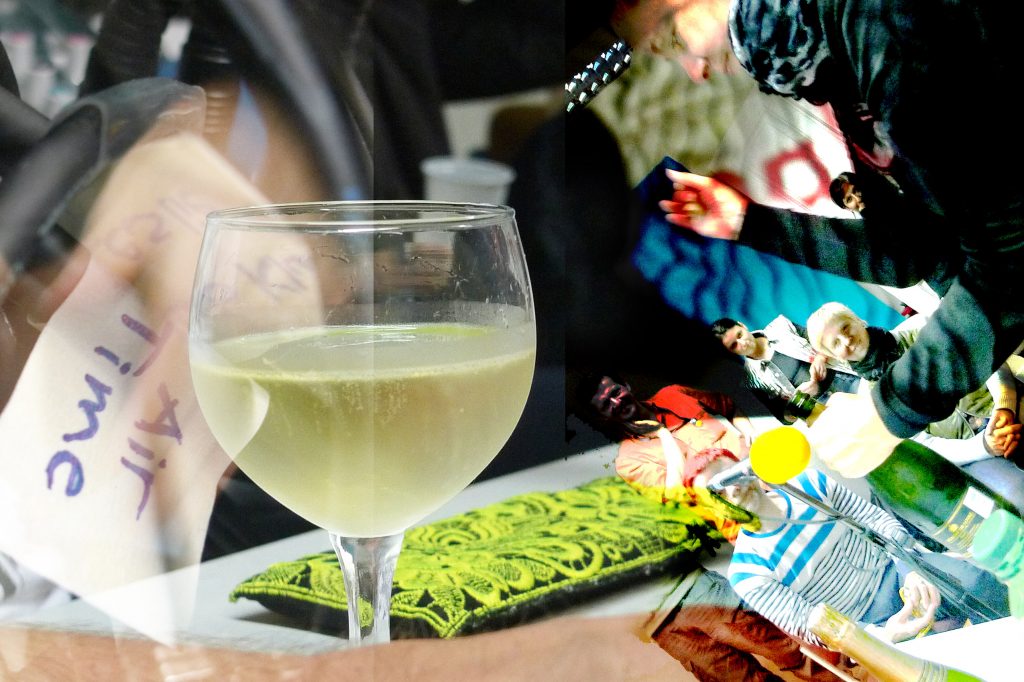 Halle / Dream 8:30, 1. Okt. 2016
The morning is wet and fresh, the asters are dripping with rain, the sky is promising drizzle. Last night I crawled with the radiorevolten artists through a Sicilian tunnel system, everybody carrying his/her  to come out in the open sun, among opuntias and screaming pink bougainvillas… evidently this being an after image of my Sicilan travel shortly ago. A concert was then staged among the cacti and I recognized artists that didn’t arrive yet in Halle but are to come in a short while… 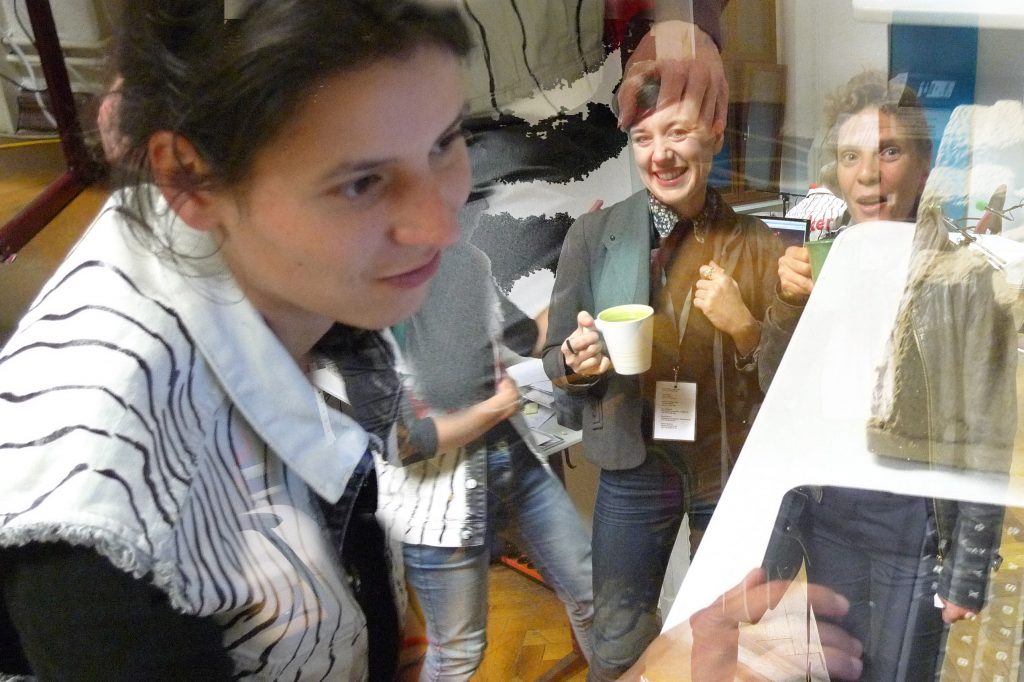 Erste Ankunft 20:00 30. Sept. 2016
A ping pong table under a disco ball, the garden swept in darkness,  crew members’ meeting on wooden benches, talking in very decided tones. Shortly after,  people are dispersing,  some smoking a cigarette, the atmosphere of tension flies away into the night air. 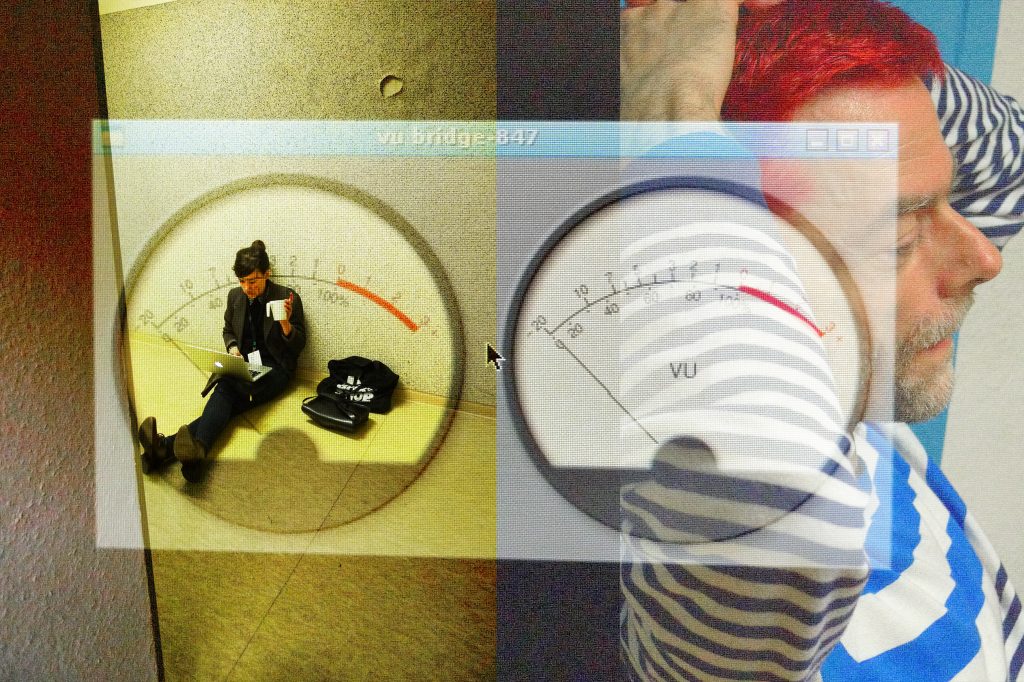 Zweite Ankunft, 22:30
On the way to the tram station the pavement strewn with little red hearts made from foil, leftovers from a party/opening in I-don’t remember-the-streets-name. I walk with Anna Friz. We meet artists: Dinah Bird, Peter Courtemanche who does the installation in the Botanic Garden, Elisabeth Zimmermann from Kunstradio, Sarah Washington, Sally McIntyre, Udo Israel and Nils-Holger Wien who designed the work wear of the Ratiorevolten/Radio Corax team. 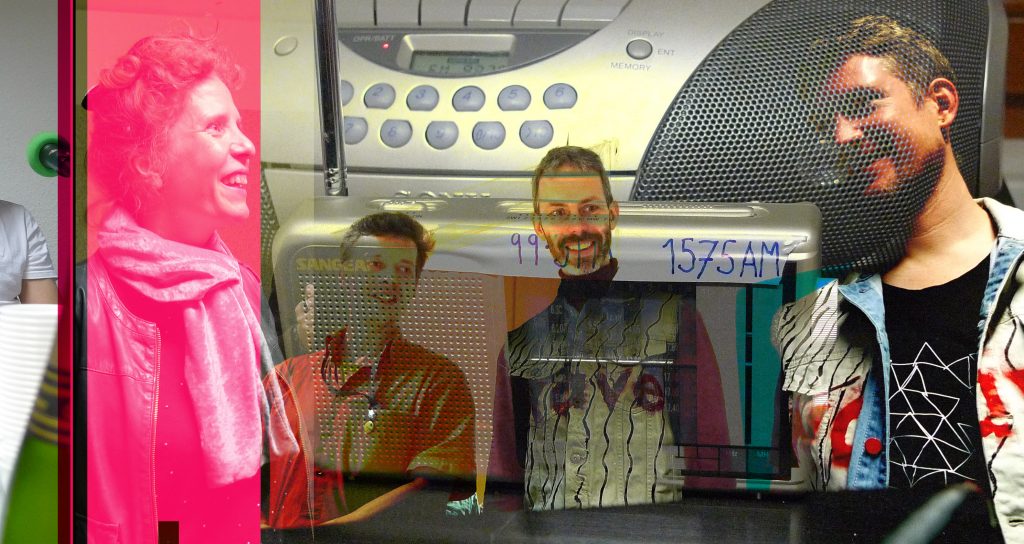 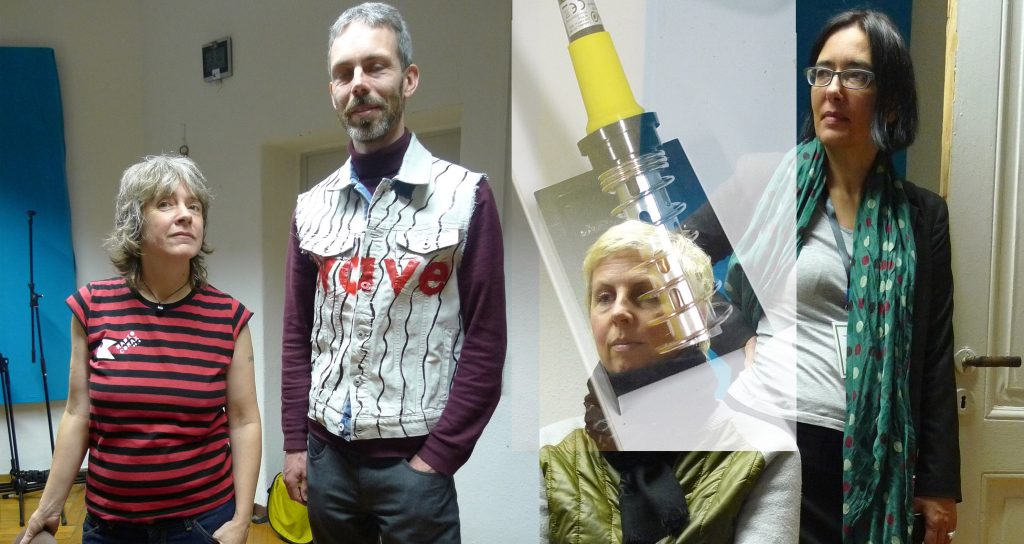 Studio „RÄDIÖ“, 23:00
A square white table, chairs, microphone stands, the mics are equipped with pop shields  in green, red, blue and green; to the left a studio deck, heaps of cables that are meticulously tagged with: Air Time, Mic 1/2/3/4, Speaker etc. In the antechamber: Soldering iron, computers, desks. The space fills with people, plastic cups, bottles of sparkling wine, and the sound of a kalimba. „Leslie“ is being prepared: An artificial head equipped with binaural microphones and a stereophonic radio transmitter. 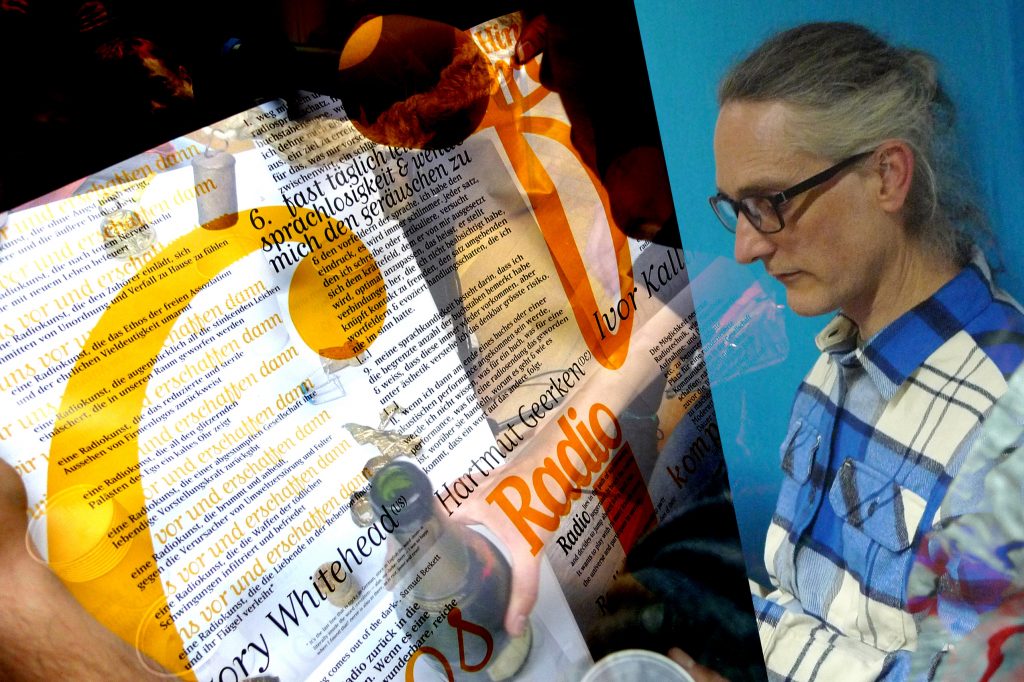 Hour 0:00
Radio and time are relative …but the moment of the opening has come! Radiorevolten is broadcasting with Mr. Israel on the mike. A radio hour unfolds in a groundswell of greetings to Halle and the worlds,  kalima sounds, sparkling wine sparkling, shouts of hooray, a golden bell ringing- There is talk about plants, waves and perfume and Tim Kurth is asked to talk about the work behind the scenes that had been going on in the past three months. Anna Friz improvises a one-off speech performance, Helen Hahmann performs a cowbell sequence, all the while „Leslie“ is carried through the house receiving and transmitting the sounds of the tour around the radiorevolten home . About 20 artists sent in their views and visions about radio as a state of being, Gregory Whitehead and Felix Kubin among them. The words are read by multiple voices, among rustling of clothes and papers and the soft notes of the kalimba played by Jan Langhammer. As the minutes unfold in their strangely weightless continuum, Knut Aufermann’s sits quietly on a chair on the left hand side of the table, with an attentive and happy smile in his face. Nobody, he said, had been able to imagine this hour, it was beyond vision with all the work at hand. All the more shining, Radiorevolten has come true.