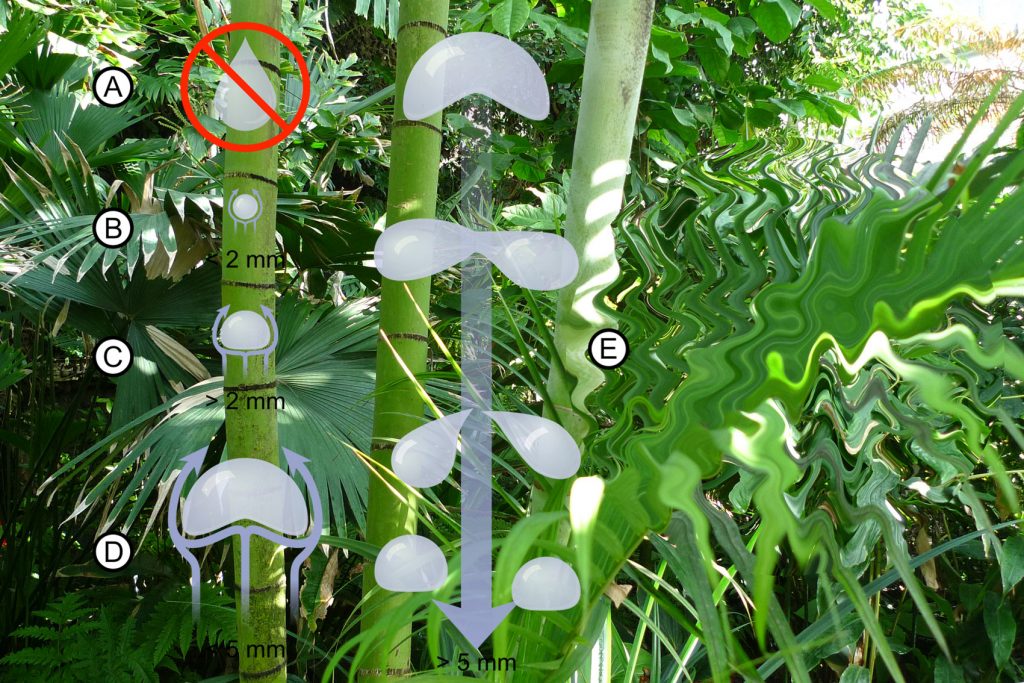 15:00 6. Okt. 2016
Yesterday I had a talk with Peter Courtemanche. He doesn’t like the idea of attaching his art works to animals but this is probably one of the least important reasons why he works with nature and plants:

– Peter, you just mentioned that Jeff Kolar had played one of your pieces that was called „Rain Motors“. Can you tell me something about this?

Rain Motors is an audio release I made six months ago, we made a version of it for the Radius Jeff kola is programming in Chigago and it deals with electromagnetic phenomena from a bunch of devices and motors… it’s hard to say it shortly actually… I can say that the title Rain Motors comes from a piece I did where I have litte (…?) motors that are powered by rain drops. So the raindrops created an electrical charge that is stored up and when there is enough electricity it spins the (…?) motor and makes these percussive noises inside bamboo poles. Then I measured the radiation coming from the motors and used that to make the recording.

– You mostly use natural energies to propel your works?

I have done a number of outdoor pieces using solar power, wind power and in one piece I use rain power. Rain power is very very tricky because it is a very small amount of energy, so I don’t know how many more works I will do with that.

– How does rain power work?

Generally you have a piezo film, that’s a type of film that when you it it it creates an electrical impulse coming up and so the individual raindrops hit the film and then you have to store up the charge in a kind of battery and then you can send that.

Part of what I am trying to do is drawing the attention to the idea to using less and less energy to do interesting things. Because so much of our use of energy is about big things and using as much as we can. This just changed in the last… well ten years. There are so many interesting things we can do with less and less energy if you think about it.

-You also then do research?

It’s not really scientific. As an artist you use science and you play with the idea of science and use it in a way that’s less rigorous.

– You also work a lot in and with nature. How do you see your work connected to the natural world or the invisible?

Invisible… I think there are a lot of things in nature that people – because they don’t live in nature but in cities – that they don’t intuitively understand. They might learn something about it in school but they don’t have a hands-on feel about it. A lot of my outdoor works try to get people to kinda play with nature in a way that’s more subtle and to notice things that are not so obvious.

– What kind of thought is at the core of your works? Do you have a philosophical credo or something along that line?

I also work with other artists who do outdoor work and I work with people who are into biomimikry. trying to create technology or biotechnologies that mimic biological things. But for me, I am interested in merging manmade technologies with the worlds of the plants. So, trying to find ways to use our technology to find out more about plants or bring more out of the plant world.

– Why plants? Why not animals?

I don’t really like the idea of attaching art works to animals (laughs).
So if its a tree it just stands there and it changes from day to day and it’s a slower pace of life than in an animal so it is easier to live beside of it for a few months.

– Do you also work with mushrooms?

I make fake mushrooms. They are sculptures and they have electronics in them and different things.

– They are almost animals aren’t they?

Whats the other thing, a lot of my works are about their personality as they’re intelligent, so the idea is also to play a device that has a sensitive intelligence to it.

– How do you define intelligence in that context?

First of all they have feedback systems so the piece has ways of somehow perceiving the outside world and figuring out what’s going on in its environment. And it has response and it has some kind of way – i have some kind of way to imagine that it is studying or analyzing its situation. Often the circuits are quite simple and the analytic system built into it is more poetic.

– What was your first art work you connedted to the plant world?

That was a piece called „Poisened Mentor“. That one was a cardboard tree fungus, it was covered in all this waterproofed material and it had six tiny solar cells like eyes and some long wire antennas dangling from it and then it would look for manmade radiation and it made clicks and pops and kind of modem or geiger kind of clicks.

(P.S: I did’n’t quite get the name of the motor… so if anybody knows please tell me, thanks!)