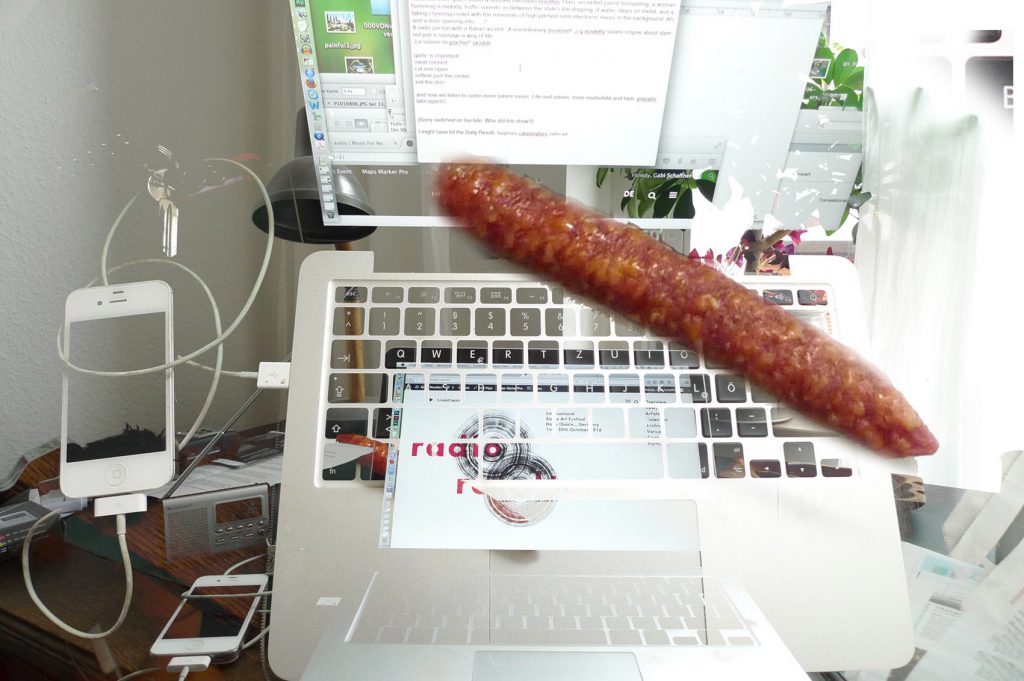 Returned from space travel & re-tuned into Radio Revolten on 99.3 with my new  spy radio: I am not sure whom I am listening to; humor, accent and attitude point to the quizzical characters of Dr. Klangendum with one or two (?) guests from Italy.

…Rain, an exited wave-parrot trumpeting, a woman humming a melody, traffic sounds, statics mixed with dripping of water, steps on metal, and a talking cheering crowd at some events with remnants of high-pitched semi-electronic music in the background. Ah, and a door opening into another strain of conversation.
A radio person with a Italian accent praises THE SALAMI: A revolutionary movement evolved as the  salami inspired a man with the name of “Jacobiti” who viewed this product rather as a way of life… not just a sausage.
„Mi piace il salame!”
Quickly, I fetch the single lone mini salami left over from my space travel to provide for a photo for this post. Meanwhile the following statements are given:

More salami music follows and an account of a famous person in historical Italy whose childhood preference was more into mortadella and ham until he discovered the salami!

Dear Diary, more about Dr. Klangendum – namely their concert – will follow in due course of these notes which are not really meant to be in sync of time/place/orbit.
p.s. The sausage in the pic is actually a “Kaminwurz’n” from Austria.