Smoo and the Glass Ladies 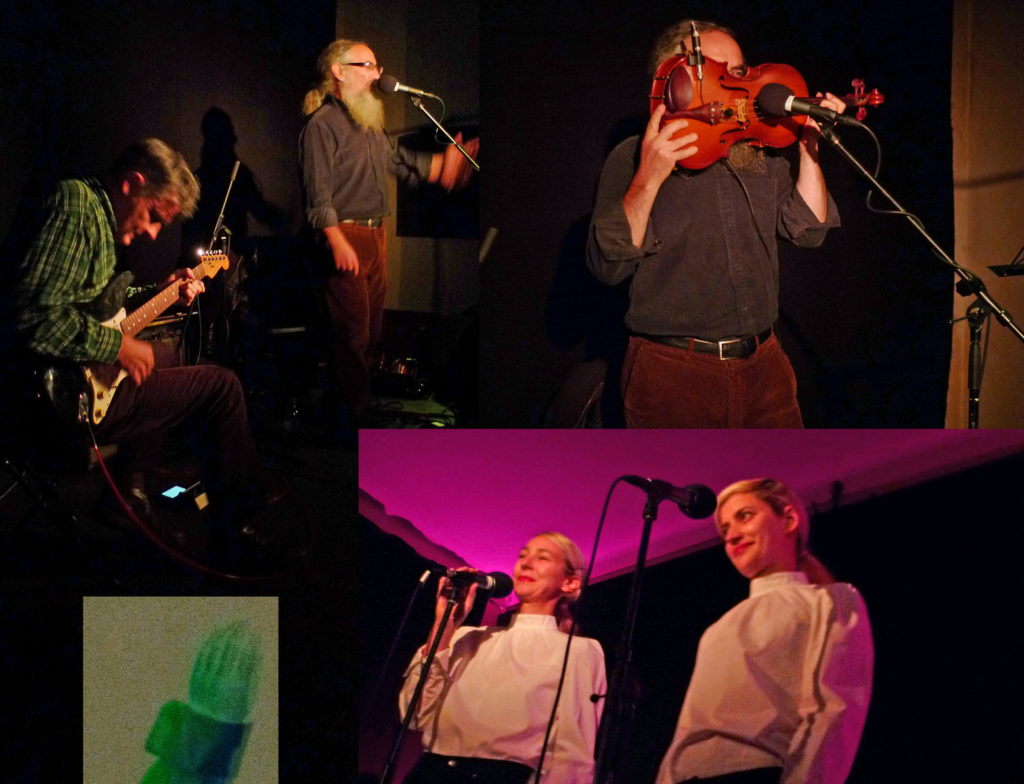 Of course there is no such word like „smoo“, but the spectrum of its relatives is already quite interesting: smooth, smog, smudge, shoe, smooch&smoochy, smut… I even found a smooth tooth blacktip shark (Glattzahn-Schwarzspitzenhai).

The violin sounds at times like brown tape noise while Bisset on his Fender guitar strums his chords in an accelerating trance mode. One might not have yet decided this is some totally weirdo folk or minimal or maybe atonal music when Kallin steps up to the mic, produces a much-thumbed folder in a greasy plastic jacket and opens his mouth. 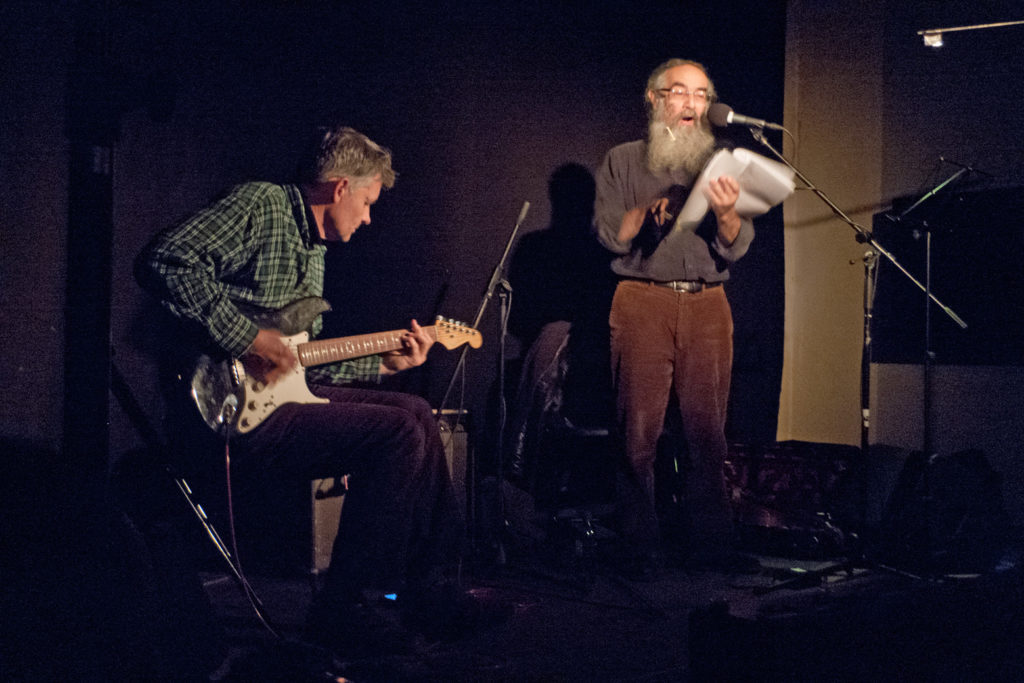 Out comes a stream of words straight taken out of catweazels dictionary: Are these rhymes? Songs? Mad Prayers? Hymns? Magic spells? He waves his hands like a hobgoblin chasing owls, he prances around and patters like a New Delhi cheap-Jack, with him you hear a-thousand languages in only three minutes and a-hundred jokes in ten, but you may not recognize one word in them.  Meanwhile Mr. Bisset has accelerated his persistently grungy folk rhythm so far as to induce occasional head banging in the audience. These are happy happy times I think, watching Ivor licking or chewing the backside of his violin, and then taking it back to his chin (not before having it wiped clean on his trousers), everywhere I look I see enlighted smiles on the faces, feet tapping, and heads nodding. Mr Kallins recital continues, now with real (but actually what means „real“ ?) words in it: „Sauerkraut“ for example, „hat“ and „hatstand“ and „street“  and there is even a dialogue rendered between a John and another person.
I notice a clothes peg in his beard and I have no idea what it is for and I don’t need to know either. Truly, who cares as long as you just can’t help smiling and enjoying this concert. 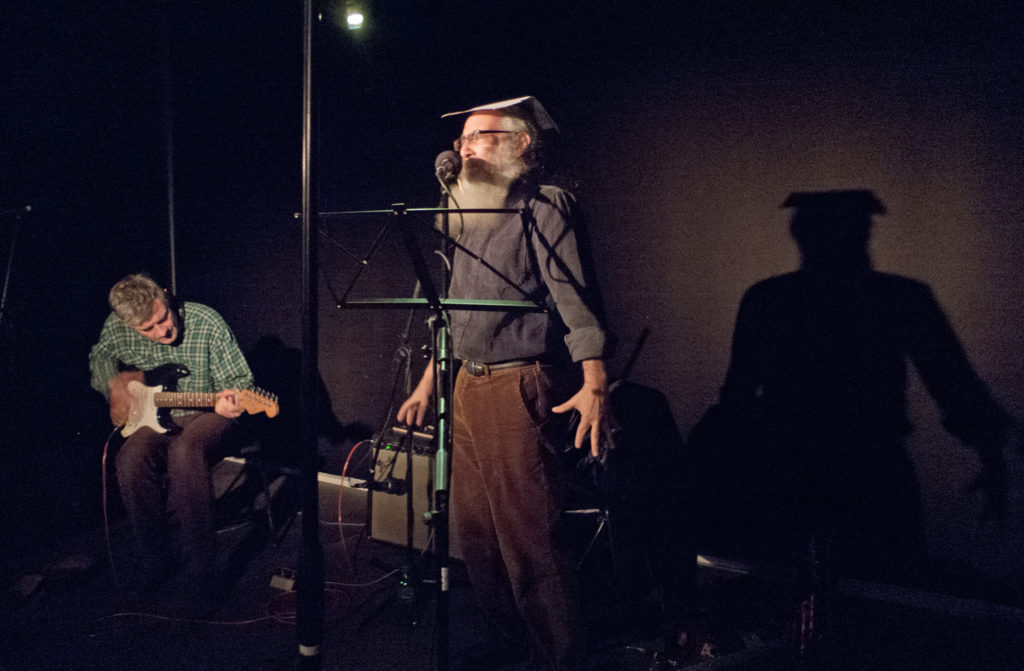 The usual break for set change came. Thereafter the topic of smiles stayed with us… from quite a different perspective. Two pretty young ladies in starched white frill blouses (they weren’t really starched but made the impression of being starched) smiled at us. And while they smiled and explained their smiles it became clear that this is a really serious matter: Smiles at work. Bodies at work. Bodies being machines at work. Smiles being the tools for the machines at work.

Not of course, but rather self-evidently this was about women at work. Most of us sell with their smiles, nest çe pas? Alina Popa and Irina Gheorghe from Bucharest are the second artistic duo on this evening. Their Bureau of Melodramatic Research  „investigates how passions shape contemporary society, as well as our affective relationship to an awe-inspiring unhuman universe.“ 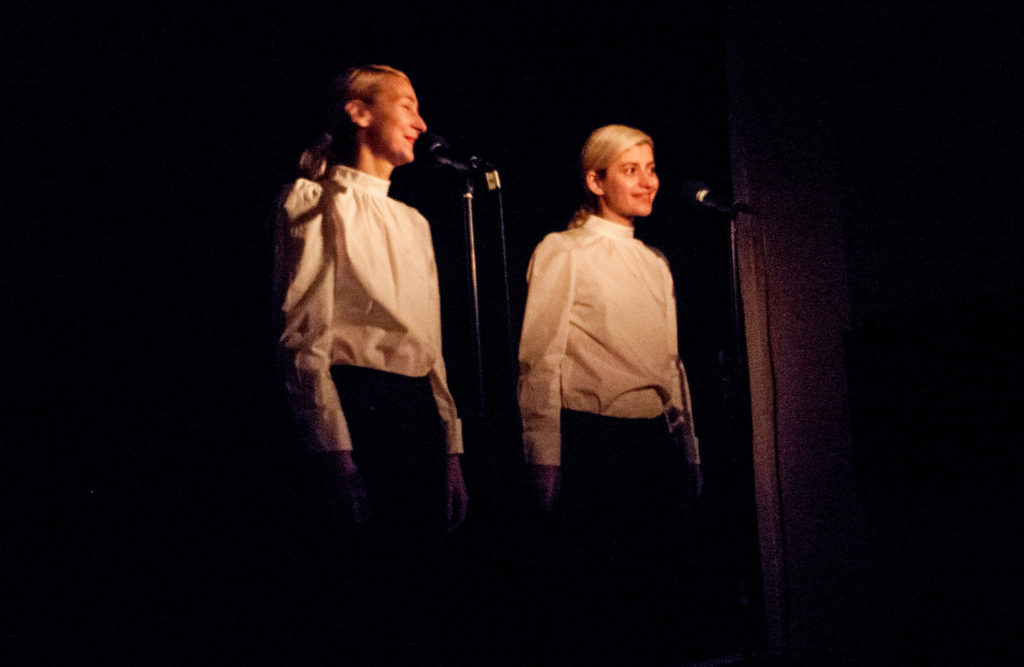 The results of their investigation is (re)presented by the figure of the „Glass Woman“. Partly imaginative partly the alter ego of the performers, she embodies the emotional mechanisms that make life in capitalist cash flow so agreeably smooth…

The „Bureaus“’ performance is quiet, concise, poetic and shot through with piercing irony. I recorded a little part of their speech, but as I need to get this blog up now I say for now I might fill that in later.
Thank you ladies for your show!