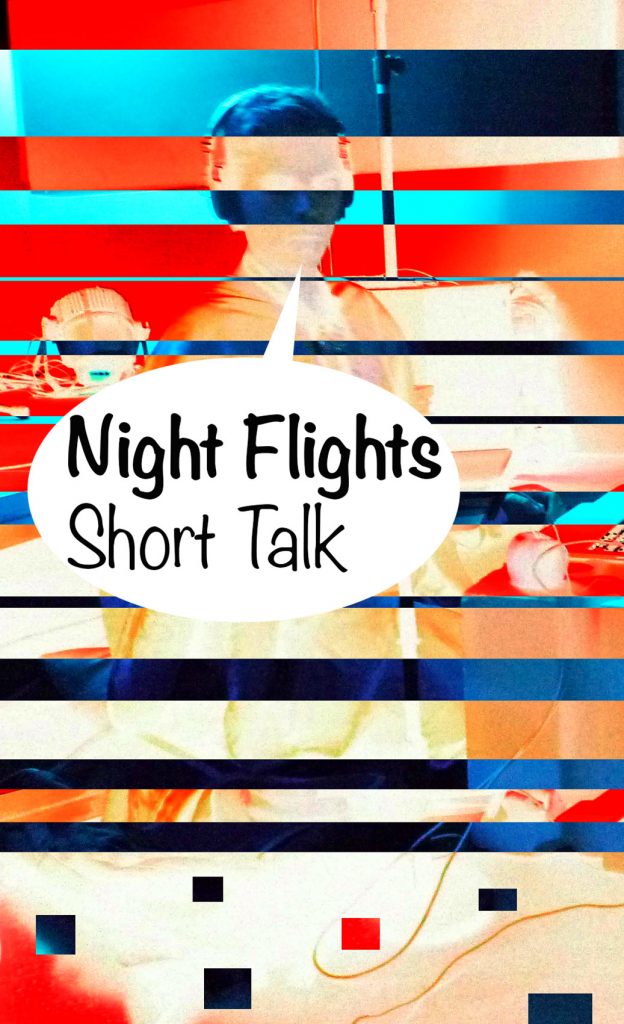 Interview with Myke Dodge Weiskopf on the day after his performance and just before his radio show at the Revolten studio. It took some time to insert it… plus a choice of blown-up gritty detail views.

– Your performce the other night,  „Night flights“, was planned to go on for a very long time?

– I was wondering about this aspect of time and how you shift from one sound to the next. Do you have a special relationship with these long-term events…. long distance flights?

The whole concept evolved out of a project in the 1960s in New York from a composer named Terry Riley who has a work called „Poppy Nogood and the Phantom Band“, one of his seminal records and that was a work he created for saxophone and organ and tape delay. And so he would perform these concerts in NY called All Night Flights. That’s where this comes from. And he had these concerts, in a loft space somewhere in NY and he would do exactly what I am doing now. He just sat up a space for people to come an spend the night and perform all through the night.
It is a combination of Terry’s influence and also some performances I have done at a show with radio enthusiasts meeting at the East Coast in the US with a friend whose name is David goran and David had started a project called „The Shortwave Shindig“ where he would also play radio samples over a period of time. So it is a combination of David’s work and Terry’s work and also my own time spend in the „Burning Man“ community where we have parties in the desert or parties in the woods. 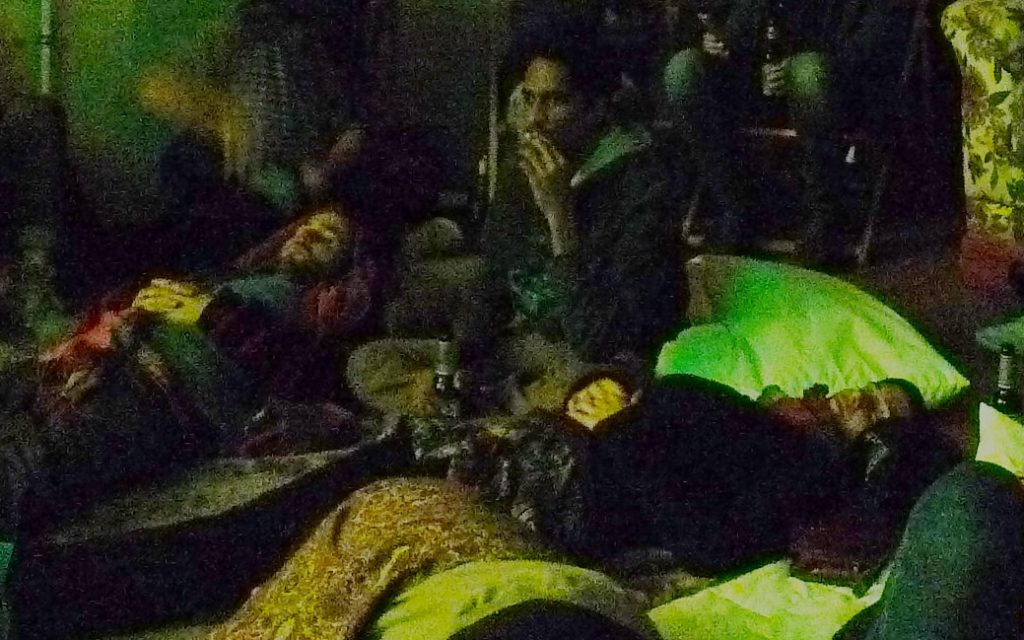 – (Enthusiastic) Ahhh! The Burning Man community. You are a part of that?

– Great! (…) You also had some kind of festive robe on while performing.

– …and you put those three apples on your desk, so it looked a bit like an altar… I was thinking of „rituals“ but maybe it’s the wrong word?
It’s not the wrong word. It is a ceremony, definitely! Because for me, in terms of my own contribution to this… this is not only for the people. It is also very much for me, it is a journey I take people on. For me it has a spiritual party (?) about it, you know, my relationship to these sounds is very much a  deep and emotional one. These are sounds that resonated with me for my whole life so I am drawn to them or obsessed with them in various ways and if you listen to the sorts of things that go on in a flight, there’s prayers… ocean waves… lots of emissions, it’s a mixture of natural sounds and man made sounds in natural environments.

You know, the project really began because I was trying to find a way to bring other people into this sound world that exists in my mind and the way that I hear the world every day. There are ways my brain combines sounds and in particular the interplay of those sounds.

– What about the short waves?

There’s a lot of shortwave sound certainly and I mix it. What I like about it is that it’s not always clear what the source or the material is. 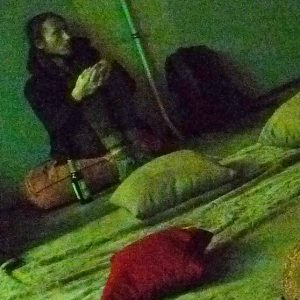 – Hm, I remember something like church bells, and an ocean and an airplane… but then there was a pattern, a structure below.

Right. It moves. It moves in a way…  If you spend some time in the natural world and then some time in the radiophonic world and then in the spaces in between… It is an ever-shifting thing. The performance itself does not have… it has a skeleton, like a loose structure that I have in mind but it very much changes from performance to performance.
It has to do with the audience and the atmosphere, because every venue is different. I tend to perform outside a lot, in the desert. And so it is very much about what people are like in this environment. So here where I was brought in under the aspect of radio … I made a much more conscious effort to bring in more radio sounds.
I even created lots of new pieces in the hostel to add to the program. 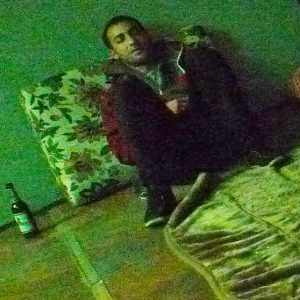 – Where did you get the material from? German radio?

No… I have a huge archive of sounds. Thousands and thousands of sounds. I have been collecting sound for 25 years so it is a combination of field recordings and shortwave recordings I made all over the world. I go to these places, one week, two weeks and just spend the whole time recording with my microphones and my radios and this is all material that I just have. And also every time I do travel I make new recordings, so I made a recording at the Chigago airport. I am always stopping and taking moments to find sounds that are interesting, and they get woven into the work. It is very much an evolving body of work.

– Last question: When one makes recordings one is always at one’s own and making the choices or compositions and there is seemingly a huge gap between you being part of these giant festivals like Burning Man and here we are also sharing with the community – what does this do to you, this lone work and then stepping out into the bigger community? Is there a tension?

It is actually no tension at all. It actually makes it more enriching for me because the performances really are the way I can connect with people . the purpose of the immersive aspect of the performance, that it goes on for a long time, I feel I am revealing myself in a very intimate way. That this is a document, not just of my personal journey of sound but in my own lifetime. It very much becomes the summary of the things that constitute me as a person as well as creative person. 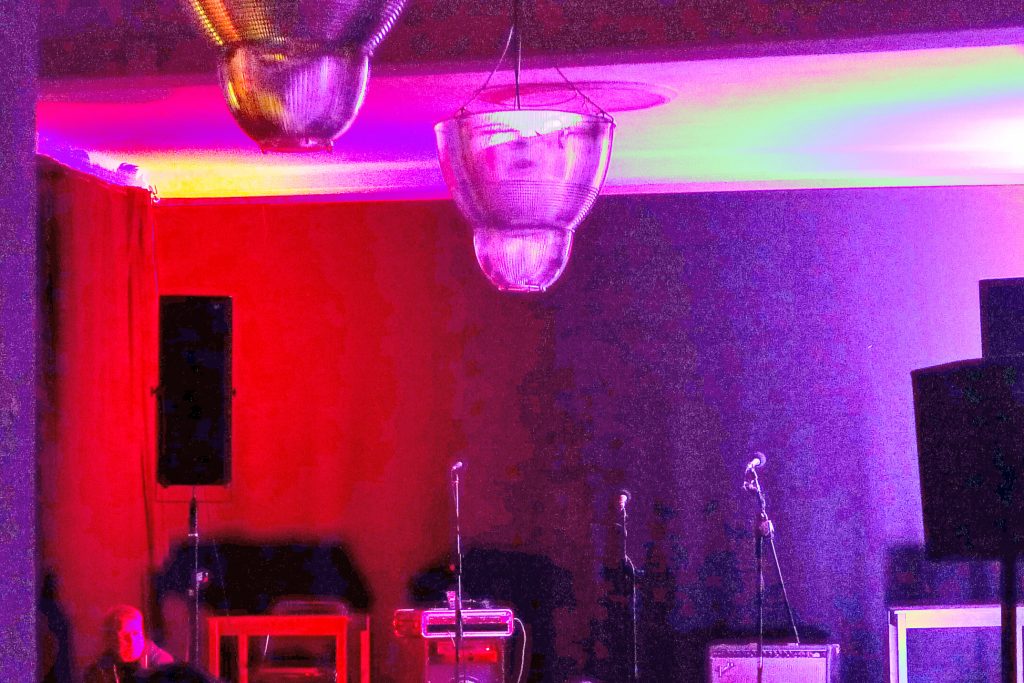 – Did it ever happen during one of your Night Flight performances that somebody didn’t get up afterwards? Do people get unconscious?

Absolutely. This (at RR) was an unusual performance. Normally people would go and they prepare to sleep. when I perform and people wouldn’t get up. They sleep for hours afterwards. So… it is a work that is meant to be experienced in your own time. Where is activates is not in your active listening mind but instead in your imaginative mind, the mind you maybe don’t have direct access to, that is the really the place where is does it’s best work, I think.