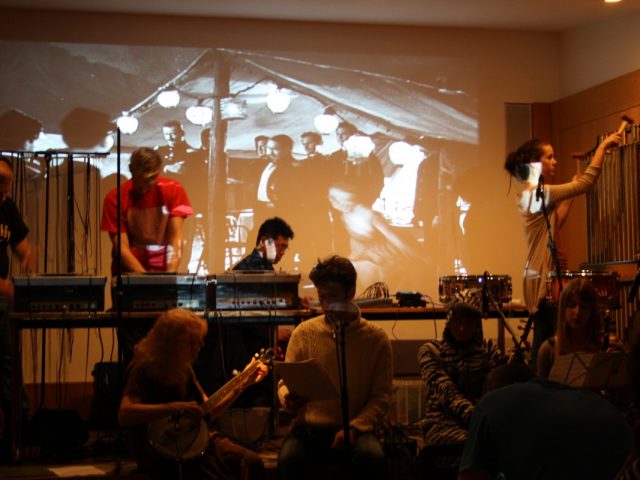 “The cute soixante-huitard aphorism “beneath the paving stones, a beach” begs an obvious question. If beneath the paving stones there is a beach then where is the sea? The sea sloshes all over the mise en scène of the Resonance Radio Orchestra’s Larry Shipping in The Abbey and Saaleaue at Planena. There is the name in the title, there are references to it in the script and it is there in the fluidity of the narrative. The sea is also there sonically. There are no field recordings of the sea, there is no hydrophonic whimsy but the sea is present in a romantic and structural sense. The music is suggestive of oceanic vastness and tidal drama. It roils like the North Atlantic yet it provides buoyancy to the tangled yarns spun by the narrator who may or may not be Larry Shipping.

The narrator appears to be speaking on the behalf of others, clairvoyant or telepath, a Larry Shipping Channel. That’s one angle but there are many other possible angles since the text is multifarious, enigmatic, digressive, bizarre. A fabulation. It melds the quotidian and the extraordinary, memoir and fantasy. It is evocative of Bruce Chatwin or WG Sebald but there are also feint traces of César Aira, Roger Caillois, Flann O’Brien. As one would expect the narrative is diffuse and playful. Tropes I have identified include death, sexual reproduction, birth, place of birth, place, evolution and extinction, heredity, psychoanalysis, wilderness, wildness, the capitalisation and industrialisation of nature, art, crime, domestic banality and, as mentioned, the sea. Some of these things fuse together. One character is born in an abattoir. Another hatches from an egg, the product of a sexual union between a Count and “some kind of fresh water fowl”. A memory of a beach and a near drowning leads to speculation on the industrial nature of the sea, changing dietary norms, and eels.

This writhing lattice of histories makes me think of Charles Olson and his chronicling of the fishing port Gloucester, Massachusets in the Maximus Poems. There’s a nebulous link to Olson in the text in the form of Sterling Hayden. In his autobiography Wanderer, Hayden records working as a deck hand on schooners harbouring in Gloucester, MA. There is a youtube video which sets black and white footage of a schooner shot by Sterling Hayden to Olson’s 3rd Letter on Georges. It is doubtful they ever met. Two ships in the night.

But this is not just a text. It is a radiophonic song-poem, a radio ballad. When I saw a nascent version earlier this year at Radiophrenia in Glasgow, Scotland, Tam Dean Burn was the principal voice. Burn devoured the words as if they were charcuterie. In counterpoint Peter Lanceley and the Resonance Radio Orchestra offered fragile pop sprechstimme and panoramic rolling music that was nothing other than the embodiment of a swoon. And that’s apposite since listening to Larry Shipping in The Abbey and Saaleaue at Planena is an overwhelming experience. It is also throughly compelling.”